We all need some little inspiration for us to start our day. Feel like binging again? How about watching sports films. Sports shows us the literal meaning of losing and winning. Have here the top five must-watch inspirational movies that will help you keep going:

Homerun — It’s a story of an alcoholic ballplayer who was suspended and required to attend rehab. His Story is not new to us, and you don’t even have to be a famous sports icon to be the later. It shows us that you are not alone in your battles.

Facing the Giants — It’s a story of an underdog who is challenged to meet the giants in the field of football. Most of them don’t have extraordinary backgrounds. The team consists of unconventional football players, and one remarkable teammate is even overweight. However, he was able to surpass the training with the help of their inspiring coach, faced with a lot of loses and frustrations. The film showed a happy ending since they were able to win the game after so many years of losses. The film tells us that nothing is impossible if you will work harder. The Life story of successful sports Icon

Michael Jordan — He experienced failing in his first attempt to enter high school varsity team. So if you could imagine if he gave in to his discouragement, he wouldn’t be as popular as he is up to now. Emerging newcomers in the sports industry are now being compared to this hall of Famer.

Lionel Messi — his size and height were not at par with his age. In spite of that, he became one of the most successful footballers in history, from being bullied in school to being one of the biggest in his industry. It only shows us that even if we were born with this condition, A situation that we didn’t choose to have, can only determine how we respond to it That is what makes a winner. It’s possible to achieve what you have been dreaming.

Tim Tebow — He was born in the Philippines since his parents were working as a missionary back then. Being born and raised in the mission field means not having the luxury that everybody would always dream of It even requires a lot of moving from place to place, but this didn’t stop him from achieving his dreams, football. He was an athletic scholar in his college days, and he was spotted since he plays excellently. They said you are only as good as your last play, but the list goes on with regards to his achievements.

Aside from that, he never forgot his roots. He organized in putting up this hospital in Mindanao which was named after him “Tebow Cure Hospital” He continues to inspire people not just in the playing field but also in giving practical help to the needy. It shows us that we should also help and encourage other people and we get inspired in return.

Life Lesson in Film
Yes, life can be very discouraging with all these setbacks. In our every dealings with work, love, family and not just in sports, remember that after we made a lot of mistakes, one can always get up, wear your Wisconsin motorcycle temps cub helmet rub and show up!

“The screening at Carleton was a smashing success – a good crowd and fantastic discussion. Moreover, students and colleagues alike wrote to me afterwards telling me how much they took away from the film – from philosophy, women’s studies, human rights, history, french – the film fits many different departmental interests.”
~ Melanie Adrian, Assistant Professor of Law, Carleton University

An Encounter with Simone Weil tells the story of French philosopher, activist, and mystic, Simone Weil (1909-1943) — a woman Albert Camus described as “the only great spirit of our time.” On her quest to understand Simone Weil, filmmaker Julia Haslett confronts profound questions of moral responsibility both within her own family and the larger world. From the battlefields of the Spanish Civil War to anti-war protests in Washington DC, from intimate exchanges between the filmmaker and her older brother, who struggles with mental illness, to captivating interviews with people who knew Simone Weil, the film takes us on an unforgettable journey into the heart of what it means to be a compassionate human being. 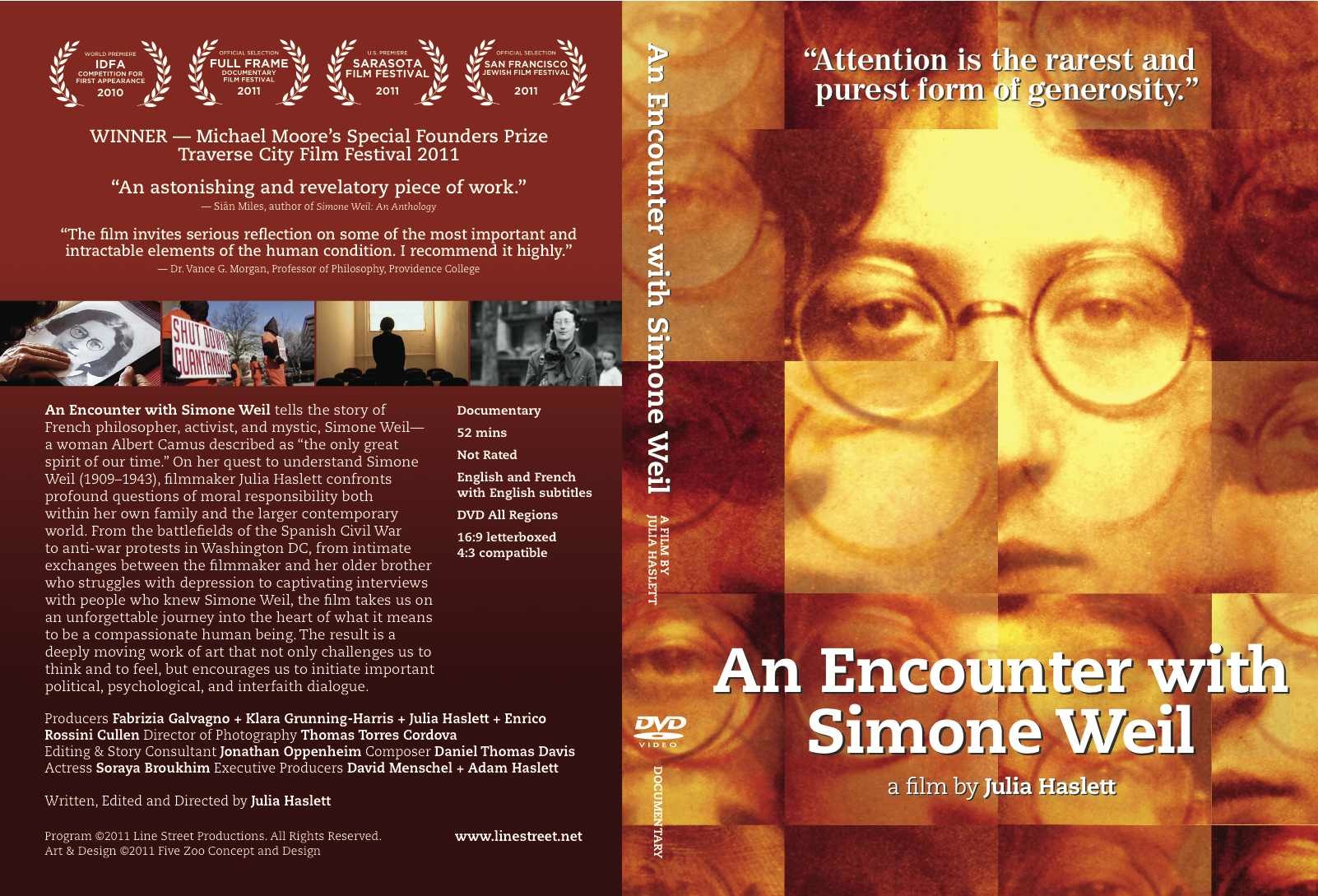 “…the film invites serious reflection on some of the most important and intractable elements of the human condition. I recommend it highly.”
~Vance Morgan, Philosophy Prof, Providence College

RECOMMENDED “A fruitful and thought-provoking introduction to this remarkable person.”~Educational Media Reviews Online (EMRO) “…the film invites serious reflection on some of the most important and intractable elements of the human condition. I recommend it highly.” ~Vance Morgan, Philosophy Prof, Providence College “Excellent for the college classroom because of its layered complexity.” ~Jennifer Rycenga, Professor of Comparative Religious Studies & Humanities, San Jose State